Quiz Number 151 with a Band Origins Picture Round

Stupendous questions from Sigur Rós to South Park. The Picture Round is on Band Origins and the Wild Card Question is a binge conundrum on Eastenders.

Here’s four samples from the 40 (plus bonus) questions included in the download. The samples are from each of the four themed rounds, General Knowledge, Music, Sport and Film & TV. The Quiz Questions download contains a PDF with the answers under each question, another PDF without the answers (if you fancy playing yourself!) plus a text version so you can copy and paste the questions into your own Quiz format.

Q05. According to nautical folklore the sighting of which legendary ghost ship is an omen of impending doom? Reveal Answer...

It’s The Flying Dutchman. Click here for some interesting facts about this spooky phenomenon.

Q18. In which capital city were bands The Sugarcubes, Sigur Rós and Of Monsters and Men formed?

Q27. Who hit the first hole-in-one in Olympic history on the opening day of the Golf at Rio 2016? 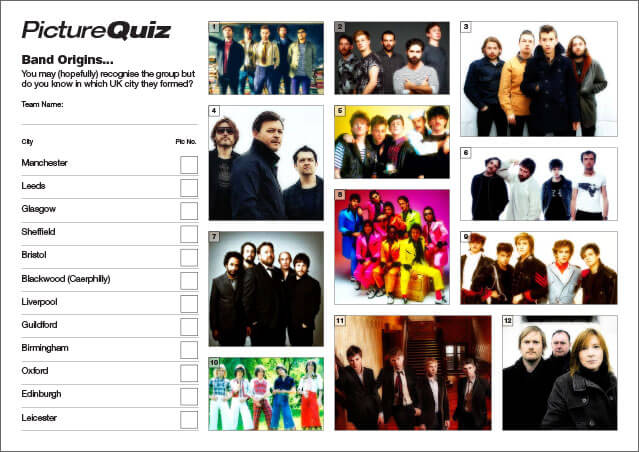 Quiz 151s Picture Round is called Band Origins… you may (hopefully) recognise the group but do you know in which UK city they formed?

Above is a low-res sample of Quiz 151s Band Origins Picture Round… you may (hopefully) recognise the the 12 groups illustrated but do you know in which UK city they were formed? The Picture Round download is a two page high quality PDF. Page 1 is the Picture Round with the answers given on page 2.

Quiz 151s Wild Card Question is a binge conundrum on the soap Eastenders.

The Wild Card download contains a single page PDF with the question, the answer and the source of the answer as a link.