Challenging questions ranging from a Spanish duo’s disco hit to the Wombles French cook. The Picture Round is on Euro 2016 Players and the Wild Card is a stat about the UK Charts Number Ones.

Here’s four samples from the 40 (plus bonus) questions included in the download. The samples are from each of the four themed rounds, General Knowledge, Music, Sport and Film & TV. The download contains 1 x PDF with the answers under each question, 1 x PDF without the answers (if you fancy playing yourself!) and a text version so you can copy and paste into your own Quiz format.

Q06. In which city would you find the UK National Space Centre? Reveal Answer...

Where else but the centre of the known universe… Leicester. Click here for a video documentary by an excited visitor.

Q20. Which Spanish female duo went to number one across most of Europe in 1977 with the disco hit Yes Sir I Can Boogie? Reveal Answer...

It was the gorgeous duo Baccara. Click here for a video of the girls doing their thing.

Q29. When the Premier League started in 1992 who were the first company to sponsor the Arsenal football shirts? Reveal Answer...

It was the Victor Company from Japan or JVC as you probably know it. Here’s some class video from the first year of the Premiership… it’s a long one mind but I was transfixed, how short were those shorts!

Q32. In the 70s kids TV series The Wombles what was the name of the cook? Reveal Answer...

The Wombles cook was called Madame Cholet. Click here for a clip of this classic kids show. 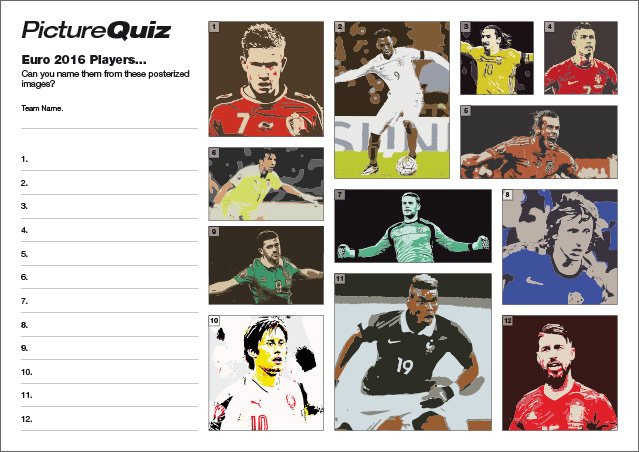 Quiz 051s Euro 2016 Picture Round is can you name the famous players in the tournament from these graphic illustrations?

Above is a low-res sample of Quiz 051s Euro 2016 Players Picture Round. Can you name these famous players from the tournament? The Picture Round download is a two page high quality PDF with the answers on page 2.

Quiz 051s Wild Card is a little known fact about the total of UK Number One Singles since 1952.