Quiz Number 074 with a Cartoon Canines Picture Round

A compendium of questions from Billy Whizz to Father Ted. The Picture Round is name the Cartoon Canines and the Wild Card is guess the stat about a Blue Peter presenter and the London Marathon.

Here’s four samples from the 40 (plus bonus) questions included in the download. The samples are from each of the four themed rounds, General Knowledge, Music, Sport and Film & TV. The download contains 1 x PDF with the answers under each question, 1 x PDF without the answers (if you fancy playing yourself!) and a text version so you can copy and paste into your own Quiz format if you have one.

Q04. Dennis the Menace and Billy Whizz are both characters from which long running British children’s comic? Reveal Answer...

It’s the timeless Beano. Click here for a news story from 2018, when the Beano celebrated it’s 80th Birthday.

It’s the indomitable Vanilla Ice, once dubbed the “Elvis of rap”. Click here to watch the cringingly bad music video… well it was the 1980s!

Who else could it be but the mighty Real Madrid. Click here for a selection of unbelievable goals by the Galácticos… incredible!

Q39. In the Channel 4 comedy series Father Ted what was the name of the actor who played Father Dougal McGuire? Reveal Answer... 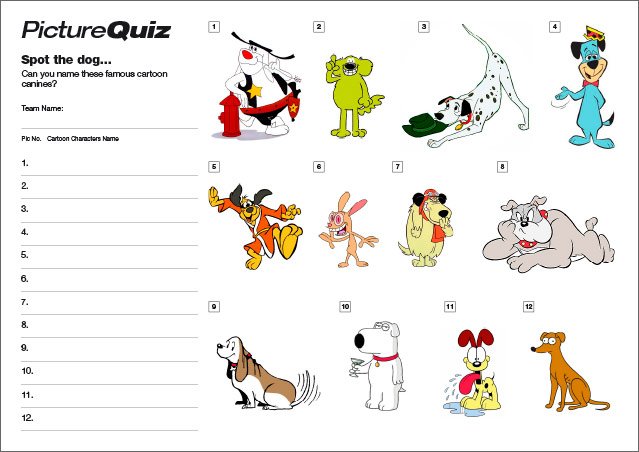 The Quiz 074 Picture Round is can you name these 12 Cartoon Canines?

Above is a low-res sample of the Cartoon Canines Picture Round. Can you name these 12 cartoon pooches who have appeared in print and on screen? The Picture Round download is a two page high quality PDF with the answers on page two.