Quiz Number 077 with a Band Logos Picture Round

An array of cracking questions from an Irish Rover to Uhtred of Bebbanburg. The Picture Round is on Band Logos and the Wild Card is incredible stat about Thierry Henry’s goals.

Here’s four samples from the 40 (plus bonus) questions included in the download. The samples are from each of the four themed rounds, General Knowledge, Music, Sport and Film & TV. The download contains 1 x PDF with the answers under each question, 1 x PDF without the answers (if you fancy playing yourself!) and a text version so you can copy and paste into your own Quiz format if you have one.

Q04. What is the fastest animal in the world? Reveal Answer...

It’s a peregrine falcon which can dive at over 200mph! Click here for a video of natures ‘Top Gun’ doing it’s thing.

It was The Dubliners (with The Pogues as special guests). Click here for the two bands singing the song live on The Late Late Show back in the 1980s.

Q27. In 2008 who became only the second player to be given a red card in a Champions League Final? Reveal Answer...

In the 2008 final between Chelsea and Manchester United Didier Drogba gave opposing defender Nemanja Vidic a slap in the face. Click here for highlights of the game.

It was that super series, The Last Kingdom. Hats off to the BBC for this superb drama… click here for a clip. 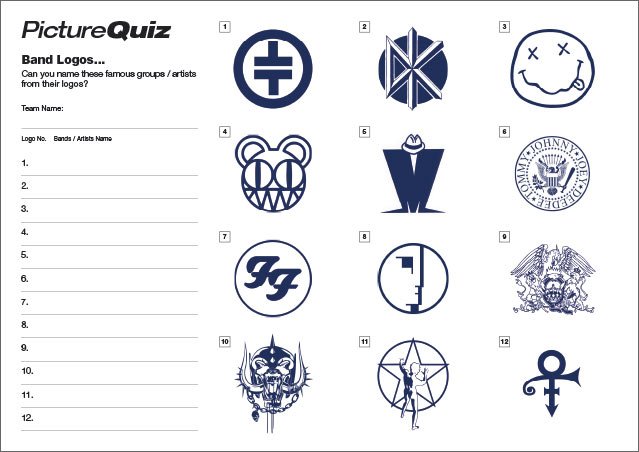 Quiz 076s Band Logos Picture Round… can you name the group or artist from their symbol?

Above is a low-res sample of the Quiz 076s Band Logos Picture Round. Can you name the band/artist who these 12 logos belong to? The Picture Round download is a two page high quality PDF with the answers on page two.

Quiz 077s Wild Card Question is an incredible stat about Thierry Henry’s goals to games ratio in the Premier League.