Quiz Number 146 with a Movies Almost Titled Picture Round

Colourful questions from a Painted Desert to Black Coffee. The Picture Round is Movies Almost Titled and the Wild Card Question is a persistence stat on the controversial 80s singles Relax and Two Tribes.

Here’s four samples from the 40 (plus bonus) questions included in the download. The samples are from each of the four themed rounds, General Knowledge, Music, Sport and Film & TV. The Quiz Questions download contains a PDF with the answers under each question, another PDF without the answers (if you fancy playing yourself!) plus a text version so you can copy and paste the questions into your own Quiz format.

Q08. In which American state would you find the Painted Desert? Reveal Answer...

It’s in Arizona and so called because of the area’s brilliantly coloured shales, marls, and sandstones, which are banded with vivid red, yellow, blue, white, and lavender. Click here for a short video showing some of the stunning Petrified Forest national park which is in the Painted Desert.

Q14. Black Coffee was a number one UK Single in 2000 for which all girl group?

Q29. Which football club did Australian Harry Kewell leave to join Liverpool in 2003?

Q37. Who stars as the Assassin in the 2016 movie Assassins Creed? 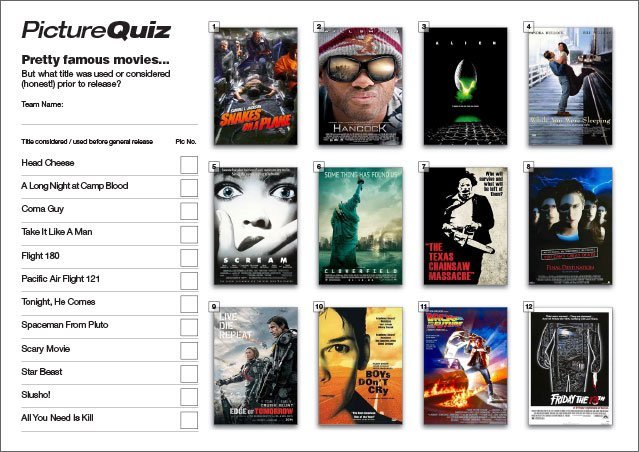 Quiz 146s Picture Round is called Movies Almost Titled… can you match the crazy film titles that were actually considered prior to release on the left to the films with their final titles pictured.

Above is a low-res sample of Quiz 146s Movies Almost Titled Picture Round. Can you match the crazy film titles that were considered for the movies prior to release (honestly!) on the left to the films pictured with their final titles? The Picture Round download is a two page high quality PDF. Page 1 is the Picture Round with the answers given on page 2.

The Wild Card download contains a single page PDF with the question, the answer and the source of the answer as a link.